Another meeting with citizens is behind us. This time the main topic was shared space – a term which is so unknown among traffic engineers in Poland, that it doesn’t even have its own name in polish. The meeting took place on Plac Wolności in Lódź. 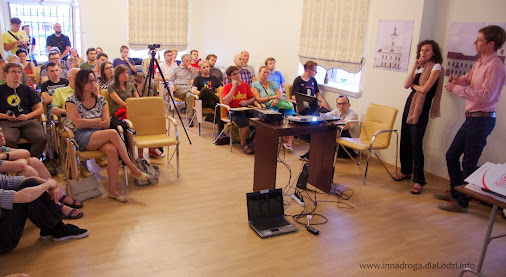 The concept of shared space was presented by Wojtek Makowski with the aid of photographs and videos from around the world. In Poland it is still very hard to imagine public spaces which are not strictly divided into pavements, bicycle lanes, tram stops and roadways, which are not equipped with traffic lights and where all traffic signs have been removed. However such an approach is becoming more and more common in western Europe. Such a policy is already being adopted in The Netherlands, Great Britain, Germany and Austria. This trend is growing and new cities keep joining in (also those outside of Europe).

The most important propagator of shared space was Hans Monderman. Monderman’s idea was to force people to start thinking about how they move and to make them notice each other while being part of the overall traffic. He also wanted to teach people not to memorize their everyday routes, but instead to constantly analyze the situation on the road, because driving conditions tend to change and one must adapt to them. According to Monderman a street full of signs indicates that people are not being treated seriously – "when you treat people like idiots, they’ll behave like idiots".

Many guests took part in the meeting. Among them was Michał Gruda (employee of the nearby Dętka Musuem) and Piotr Biliński (former Architect of the City of Łódź). We hope that the discussion about the future of Plac Wolności will continue and that it will not be limited to architectural issues, but will also involve ideas on how to increase its functionality and attractiveness.

During the meeting we handed out the second set of materials related to the topic of shared space. Each participant obtained a set of printouts containing detailed information about the discussed issues. These materials are also accessible online (click).