“Is Karolew a good place to live? I came here, because it isn't.” - that is how one of the residents comments on the estate.

On Thursday, July 16, we held the first out of two meetings with the residents of Karolew. The purpose of the meeting was to gather opinions, comments and suggestions with regards to safety, which will be used to create possible solutions for traffic organisation in the neighbourhood. 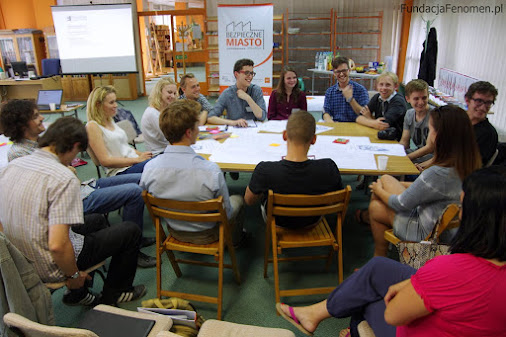 During the meeting in a city library in Karolew (ul. Wróblewskiego 67), together with the residents and those caring about its future, we discussed traffic safety in Karolew. The attendants were acquainted with infrastructure determinants analysis and methods of traffic calming. Apparently, traffic lights and speed bumps are not the only solutions.

Such an introduction laid a foundation for the workshop. Equipped with large format maps of the estate and detailed analysis of the legal status of the land, cycling intensity and road/bicycle lanes design, the residents got down to indicating problem areas as well as those which are well-organised.

All discussed topics  circled around one mutual aim - improving the living space around Karolew. The opinion tha the location of the estate is very convenient was unequivocal. It is in the vicinity of Łódź Kaliska railway station and the city centre, at the same time being far enough of the hustle and bustle in the city.

The attendands paid attention to the area near Bratysławska - the street is currently being renovated as part of the W-Z project. They pointed out issues with pedestrian and cyclist safety at the crossing next to the bus depot. Other frequently discussed topics regarded issues with parking around the area and poor or no cycling infrastructure.

All coments and requests were noted on regular basis and highlighted on the map. Owing to such organisation, a list of priority issues was created. The list is a foundation for further actions of the organisers which are aimed at coming up with possible solutions at the next meeting on July 30, 2015 (at 18.00, in the library as well).