At the next meeting we will look into solutions beneficial for improving traffic safety with particular emphasis on cyclists. 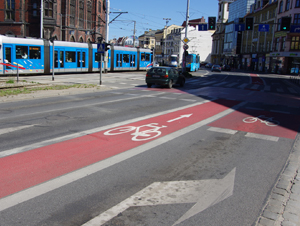 The number of bicycles in Poland is growing - according to the Central Statistical Office over 70% of Poles owns a bike. It is visible on city streets as well, as a growing number of residents uses bikes as an everyday means of transport. Such an increase in cycling, however, calls for traffic safety improvements in the form of cycling infrastructure. it is a common misconception that the above is achieved by builing new, separate bicycle lines. In fact, in a lot of European cities the cycling infrastructure is being developed and improved, very often without creating new, separate routes.

We invite you to the meeting with Daniel Chojnacki - the head of the Cycling Development Section at the Department of Urban Engineering at the University of Wrocław, the so-called 'cycling officer'.