Traffic calming - report on the meeting

Another meeting from the series 'Safe City - the Other Way' was held. This time we invited Tomasz Wawrzonek from the City Hall in Gdańsk. 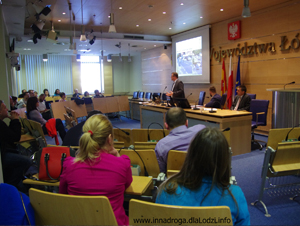 The meeting took a unique course. We met in the local council of the Marshall's Office in Łódź. Through the courtesy of councillors from the City Transportation Committee, we managed to combine a session of the committee with the visit of our guests. Thanks to such a turn of events, the meeting was attended not only by city residents, but also councillors from the committee, representatives of the Road and Transportation Authorities, Police, City Guards and City Hall.

Tomasz Wawrzonek is the head of the Department of Traffic Engineering of the Road and Greenery Authorities in Gdańsk. He is directly responsible for the fact that Gdańsk is now considered to be a precursor of traffic safety in Poland. Owing to the hard work of Wawrzonek's subordinates, year 2014 was considered the safest in terms of traffic safety in Gdańsk. Almost a half of all streets in Gdańsk is subject to traffic calming, tempo-30 zones are being introduced, counter-traffic bike lanes are used on a large scale and the number of safe pedestrian crossing is increasing owing to a variety of traffic engineering devices used.

The presentation provided various ways of dealing with road hogs. It presented different tools through which traffic safety is improved and aspirations of road hogs reduced. All of the above backed up by research, statistics and analysis conducted by Wawrzonek himself. As a result, the officials obtain data from research done before and after a particular solution is implemented. All the date is documented and clear: the calmer the driving is, the smaller the number of accidents is.

A 45-minute presentation was followed by a series of questions both from the councillors and city residents. Some found it hard to believe that such solutions can be used in Poland. When one of the female residents asked whether everybody at the City Hall of Gdańsk supports Wawrzonek's ideas, he denied, but added that his research findings convince them.

In addition to an improvement in traffic safety, Wawrzonek admits that his biggest success was making the residents understand how to ensure it efficiently. Hardly anyone requests traffic lights in Gdańsk. Instead, the residents demand raised pedestrian crossings, speed bumps, traffic islands and chicanes which cause vehicles to slow down as they would for a curve. Wawrzonek boasted about the fact that recently a complaint was raised against him by a board from one of the estates who has been waiting for calming traffic at one of the streets for a year and a half.

Video report on the meeting:

At the meeting we distributed materials on the topic, in the tenth part of the series we described the methods Gdańsk uses in traffic calming, what a City Board on Traffic Safety does and how residents can detemine a status of the road and propose changes in traffic organisation. The publication is available online free of charge.