Roadside greenery - report on the meeting

The meeting on roadside greenery turned out to be less dangerous than the initial title suggested ('Are trees attacking drivers?'). 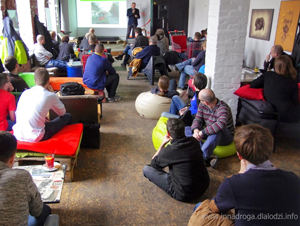 The meeting was held in hospitable cafe-bar Niebostan at ul. Piotrkowska 17. To our delight the venture was filled to capacity and some of the guests had sit on poufs as all the better seats had been taked.

Our expert, Tomasz Bużałek, presented various examples from abroad. The presentation included examples of proper roadside greenery arrangements next to railway and tram tracks, streets in the city centre and residential areas. The example of green catenary system caused a stir.

The presentation was followed by an over hour-long discussion during which the attendants exchanged experiences from Łódź and replied to one another's questions. Both dr Arkadiusz Jaksa, the director of the Board of Urban Greenery (ZZM) and Urszula Niziołek-Janiak, councillor at the City Council of Łódź took active part in the discussion.

dr Jaksa commented on numerous problems with urban greening and looking after the greenery later by saying that 'it is not a question of good will, but one of a mindset shift'. In addition, he commented on new projects created by the Road and Transportation Authorities by saying that 'soon enough there will be no more space to plant trees'. 'If we want well-arranged greenery, we need to mind the cost. Howver, I do not mean that there is no money for it' he added. The attendants particularly enjoyed one anectode: 'We wanted to plant conifers as they are green throughout the year, but the idea was rejected as historically they could not have grown in that street'. And indeed, there were no conifers in the industrial part of the city as they are particularly vulnerable to pollution. However, an improvement has been noted in recent years.

dr Jaksa's statement that 'a tree is a microclimate in itself' was welcomed with overall approval. What he meant was that small animals live in crowns of big trees and even when we plant 10 or even 100 tiny trees in exchange for the big one, it will not be an exact equivalent, also in terms of oxygen.

Potr Biliński, a city architect, commented on the reluctance to plan trees against the existing law on specified distance between a tree stand and a road: 'There are no peovisions that cannot be derogated from'. In addition, he highlighted that 'Greenery can be enrolled in local planning'.

One of the residents who came to the meeting highlighted that 'residents should be able to have an impact on the program concept' with regards to large investments as well. Moreover, he pointed out that 'it is worth checking which projects are currently being reviewed with the Department of Environmental Protection, as it is the time when we can make comments'.

At the meeting we distributed materials on the topic, in the ninth part of the series we described how to arrange roadside greenery and revised ways on how to request funds from the city budget for greening your residential area. The publication is available online free of charge.