Parking - report on the meeting

Our last meeting covered one of the most controversial topics - parking cars. A heated debate could not have been avoided. 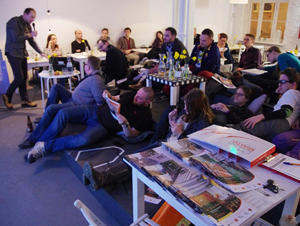 Our experts, Wojciech Makowski and Tomasz Bużałek, presented international examples. Their presentation included parking zone examples from the cities of Finland, Germany, Switzerland and Czech Republic. Moreover, it identified obstacles in Łódź and Poland which make the habits of Polish drivers prevail 'intuitive parking' expected from them by Łódź Road Authority. Those obstacles resulted in car being parked at tram stops, trackways, in gateways or across the sidewalk.

The presentation was followed by an over hour-long discussion during which the attendants exchanged parking experiences from Łódź and replied to one another's questions. One of the opening suggestions was to analyse parking zones in the city centre once more. Another opinion was that the current situation in the city centre is unacceptable for pedestrians who 'cannot walk on the sidewalks next to each other and talk as sometimes the walking spaces is so narrow that it is only possible to walk in file'. 'One no longer feels like strolling around the city centre' said one of the attendants.

Large-sized car parks were offered as a solution to the problem, but it was quickly rejected owing to the city not being able to afford such presents. Indeed, while one parking space in the street costs PLN40.000, one located a multi-storey car park costs PLN100.000. These costs would be covered by taxpayers. One of the attendants suggested that if one wishes to provide themselves with a parking place, they should pay for it out of their own pocket.

Some of the attendants shared their experiences with illegally parked cars. Multiple intervention requests to the city guards and the police ended with the resident taking matters into his own hands, i.e. putting up a fence around a lawn frequently run over by parked cars. Others agreed that Polish people share an odd opinion that nobody will punish them for improper parking and therefore hardly any driver takes possible consequences into consideration.

The meeting ended with a couple of suggestions to orginise community actions which would have to make drivers aware of the consequences of improper parking.

All of the attendants received a new episode of our publishing house gathering most of the research and analysis on parking and parking policy.

At the meeting we distributed materials on the topic - in the eighth part of the series we described how to organise parking, why metered parking zones are used in cities, the importance of parking norms in local planning, creation of parking places in the context of street development and the most important provisions of the Traffic Law Act in terms of parking. The publication is available online free of charge. 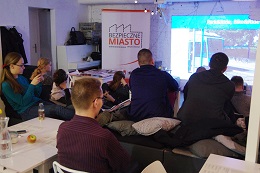 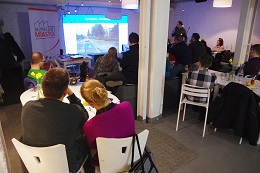