Safe surfaces - report on the meeting

December is the beginning of winter, a season during which difficult road conditions force drivers to take bigger care of the road surface. 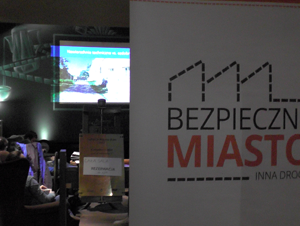 At our previous meeting we raised the topic of various types of surface composition. We brought up which surface composition is used to preserve the atmosphere of a historic street and which is required in places where drivers are expected to slow down and drive carefully.  The surface can 'give them a hint' and make it a lot easier so that nobody is surprised by a newly established speed limit road sign.

However, the second half of the meeting was devoted to the so-called 'winter road maintenance'. For that reason, Tomasz Trela - the Vice President of Łódź, was invited to take part in the meeting together with his subordinate Magdalena Gajęcka, the Deputy Director of the Public Utilities Department. The meeting was also attended by councillor representatives - Bartosz Domaszewicz, chairman of the transport committee and Urszula Niziołek-Janiak.

The discussion that started after Tomasz Bużałek's presentation focused mainly on snow clearing and removal. Among other things, the attendants of the meeting learned the cost of a single trip of all snowploughs (PLN350.000), the cost of removing snow from the streets (PLN30/m^3) and at which temperatures the streets and pavements are sprinkled with salt (above -7°C) and at which with calcium chloride (-7°C and lower).

The example of Żoliborz Estate in Warsaw inspired us to carry out social consultations in Łódź with regards to other ways of snow clearing that do not require salt or chemicals. The consultations will be carried out in the near future.

At the meeting, another episode of our publication - one gathering all provisions concerning local government with regards to traffic - was handed out to all the attendants.

At the meeting we distributed materials on the topic, in the sixth part of the series, we described what the types of surface composition are and how to take care of them during winter. Each participant was given a printed handout describing topics discussed in detail. The publication is available online free of charge.